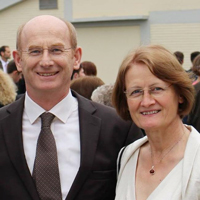 Since I have been asked by many people, I would like to share about my personal experience about working with Hyung Jin Nim and especially Kook Jin Nim during the last 23 years and explain why I support Hyung Jin Nim as the anointed successor of True Father’s mission.

Many brothers and sisters are very disturbed by the impact of the conflict between Mother Moon and the two sons loyal to True Father. They are so upset with this development that they refuse to research and confront the facts shown through the content of Hyung Jin Nim’s arguments and the way the highest level UC leadership is acting.

Our family, among others, also went through the agonizing process of seeking the truth. We have come to these conclusions through prayer and God’s guidance. It is our sincere desire that with God’s help healing can come about quickly.

For the last 23 years I have been working with Kook Jin Nim (KJN) in business matters. During these years we overcame many obstacles. I saw many projects that were initiated by True Father ending up in failure. I also saw how KJN was able to turn such projects around. I have been able to observe and participate in this.

From day one I witnessed how True Father (TF) sent Kook Jin Nim to businesses and church projects that were failing. He worked pro bono and offered suggestions to his father, who made the final decisions.

I also witnessed the opposition from many church and business leaders that KJN was up against because of such remediation measures. I also observed how proud True Father was of him. Over time the scope of his responsibilities grew and he eventually moved to Korea in 2006 to lead the majority of businesses related to the UC.

He was harshly criticized for being involved in manufacturing of products for self-defense. I had the opportunity to accompany True Father and KJN visiting his factories and can testify that True Father during these and other occasions expressed pride toward his capable son. True Father did not share these criticisms of KJN, instead he trusted him with more and more responsibilities.

Since 2010, his additional responsibilities included: large scale business projects, public relations, security, outreach in the world of politics and comprehensive oversight of the Korean and Japanese Unification Church organizations.

I observed a lot of mismanagement in the UC related projects and wondered why True Father tolerated this and did not demand changes.

The answer was more religious than business oriented: the mission of the Messiah while on earth is to love Lucifer and those in the archangel positions more than his own children, and thus restore their sins.

The Lord of the Second Advent came to substantially restore us back to God’s lineage through the Blessing. Every person, however, has his or her own responsibility to choose the right path and God cannot interfere in those personal decisions.

It was God’s hope, that the so-called “Cain” children (the blessed couples and leaders) would voluntarily submit to True Father’s anointed and loyal physical children and thus bring eternal victory.

Father taught us that we as his Cain children could reach a deeper level of heart through connecting with his Abel children. And when passing on his mission there should be a surrender of True Parent’s “adopted” children to his anointed representative and child of his direct lineage. Mother was to play an important role in this as well.

In all my observations, I have come to the conclusion that this voluntary surrender did never really take place. This is the main reason for the schism in the UC today. Hyung Jin Nim (HJN) should have been accepted as True Father’s inheritor. Mother should not have promoted the Han lineage over the Moon lineage. TF entrusted the inheritance of his legacy to HJN to preserve it. He proclaimed in June of 2010 when expressed his last Will in written form when he stated: “The representative and inheritor is Hyung Jin Moon, anybody else is a heretic and destroyer.” He also said then: “Nobody surpasses HJN’s standard of faith.”

True Father and Mother crowned HJN and his wife as a couple on three different occasions in 2009, including a public last will and ceremony nominating him “International Chairman” in 2008. These events have been attended by many witnesses and can be viewed on YouTube.

In his last ceremony, before his transition into spirit world, in June 2012 True Father established Hyung Jin Nim and Kook Jin Nim as successful Abel and Cain in God’s Providence.

After TF passed, Mother should have accepted and supported HJN’s couple as the inheritor couple, however, she relieved both sons of all of their responsibilities given to them by the Messiah himself.

This act is of monumental importance, if you consider that the Lord of the Second Advent came to re-establish God’s lineage on earth. He has chosen Hyung Jin Nim’s couple over any of his other sons and all leaders. That was his last Will.

Mother should have supported the rightful heir–Hyung Jin Nim–to pass on True Father’s words and traditions to future generations. She then would be in a glorious position as queen of Cheon Il Guk in all eternity. Then the worldwide UC family would have had a clear path to go ahead.

Instead, unexpectedly, the worst case scenario is playing out: fundamental changes were made to the Messiah’s teachings and traditions, which he gave to us and fought for with his blood, sweat and tears–and his anointed successor was kicked out.

All we can do now is plead with God to give us insight for how to deal with this situation.

May God bless you and your family,