The Constitution of Cheon Il Guk

The Declaration of the
Covenant of God's Kingships

1.
I, Hyung Jin Moon, the Crowned Successor and Representative Body of the Cosmic True Parents of Heaven and Earth and full Inheritor of the Kingship of God, with all the authority endowed in me by True Father - the Messiah, Lord at the Second Advent and King of Kings, hereby declare that all peoples of the Kingdom of Heaven, Cheon Il Gook, are sovereign children of All-Mighty God, Christ who became ﬂesh and gave us an Immeasurable Grace by engrafting us to God's Life, God's Love and God's Lineage. This endows all peoples with immutable and inalienable rights, that originate from their Creator, God Himself, through the physical Kingship of Christ established at His second Coming as the True Father, Sun Myung Moon.

2.
This Establishment of the Kingship of God, marks the end of Satan's Kingships of past tyranny and domination over the peoples of this world throughout time. By the Complete Victory of the True Father, King of Kings and Lord of Lords, the conditions were met to establish God's Physical Kingdom on this Earth. However, due to the failure of Han Mother at the ﬁnal hour, the world moves through a period of judgment instead of blessing and the providence has been extended over three generations to the Three Kingships of God. Now, as I, Hyung Jin Moon, take my rightful place as King of the Second Kingship of the Kingdom of God, Cheon Il Gook, I will declare God's immutable and unchangeable covenant between God and the peoples of this world.

3.
In the beginning of human history with the Garden of Eden, God's original world of freedom, liberty, conscience, and relationship with God was to be established. It was to be a world were the powerful archangels were to be the servants of the children of God. However, due to the Fall, Eve committed adultery with the Archangel and tempted Adam into sinning against God. Thus, the world of Satan's domination over mankind was established and history has shown centralized powers, either governmental, religious or ﬁnancial use artiﬁcial structures to rule over mankind sometimes taking freedoms gradually and sometimes eliminating them by brute force. God’s Kingdom on Earth must be established where the artiﬁcial structures of power, representing Satan, shall never again rule over mankind and humanity. The Role of the Kingships of God, must be to preserve and protect this covenant between God and the peoples of this world.

4.
It is the absolute responsibility of the future Kingships of the Direct Blood Lineage of God, to renew this pledge and covenant with each passing generation. Future Kings of God's Kingdom, Cheon Il Gook, who desecrate this most sacred covenant between God and His people, represented as the "United States of Cheon Il Gook," shall heap upon themselves every manner of every curse and will be ruthlessly judged by the spirit world and All-Mighty God. Let this be a fearful warning to the future Kings of Cheon Il Gook.

5.
In the Coronation Ceremony of God's Kingship Jan. 13, 2001, True Father, the Messiah, Lord of the Second Advent and King of Kings declared that, "Article I of the Constitution of the Kingdom of Heaven is that you will not stain the blood lineage. The purpose is to preserve the lineage, keeping it completely clean. It means to maintain the purity of blood lineage for eternity. From this point, the blessed blood lineage that has been inherited through God's love and God's life cannot be contaminated by the actions immersed in the habitual pattern of the fallen world...The second point is not to violate human rights, and the third point is not to steal public money (nak chwi), using public property for yourself."

6.
Therefore, I, Hyung Jin Moon, the Crowned Successor and Representative Body of the Cosmic True Parents of Heaven and Earth and full Inheritor of the Kingship of God, with all the authority endowed in me by True Father – the Messiah, Lord at the Second Advent and King of Kings, hereby declare the following Immutable and Unchangeable, "Bill of Human Rights of Cheon Il Gook," for all people at all times, that shall NEVER be abridged or added‐to, in their enumerations. 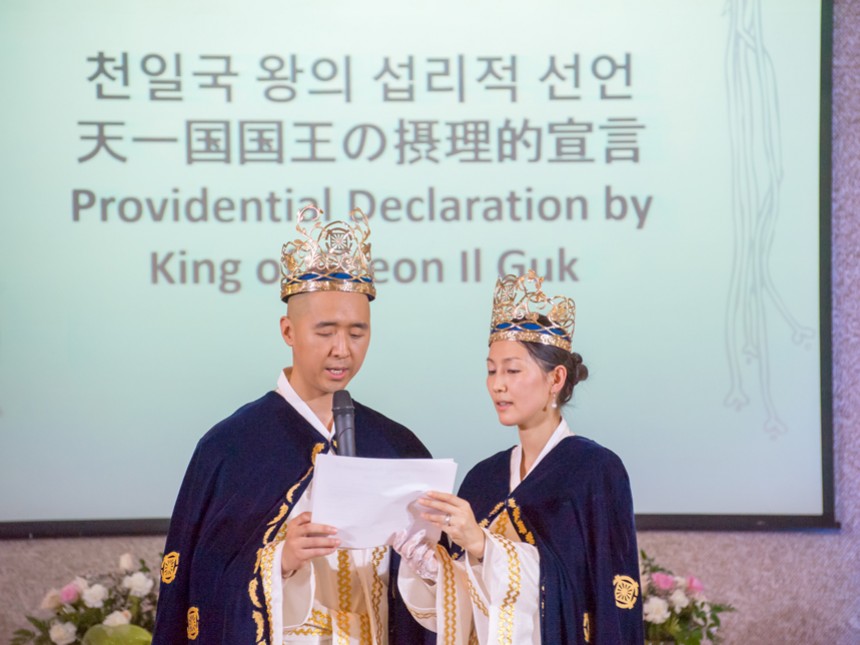 The Bill of Human Rights of Cheon Il Guk

1.
Congress shall make no law respecting an establishment of religion, or prohibiting the free exercise thereof; or abridging the freedom of speech, or of the press; or the right of the people peaceably to assemble, and to petition the government for a redress of grievances.

2.
A well regulated militia, being necessary to the security of a free state, the right of the people to keep and bear arms, shall not be infringed.

3.
No soldier shall, in time of peace be quartered in any house, without the consent of the owner, nor in time of war, but in a manner to be prescribed by law.

4.
The right of the people to be secure in their persons, houses, papers, and effects, against unreasonable searches and seizures, shall not be violated, and no warrants shall issue, but upon probable cause, supported by oath or affirmation, and particularly describing the place to be searched, and the persons or things to be seized.

5.
No person shall be held to answer for a capital, or otherwise infamous crime, unless on a presentment or indictment of a grand jury, except in cases arising in the land or naval forces, or in the militia, when in actual service in time of war or public danger; nor shall any person be subject for the same offense to be twice put in jeopardy of life or limb; nor shall be compelled in any criminal case to be a witness against himself, nor be deprived of life, liberty, or property, without due process of law; nor shall private property be taken for public use, without just compensation.

6.
In all criminal prosecutions, the accused shall enjoy the right to a speedy and public trial, by an impartial jury of the state and district wherein the crime shall have been committed, which district shall have been previously ascertained by law, and to be informed of the nature and cause of the accusation; to be confronted with the witnesses against him; to have compulsory process for obtaining witnesses in his favor, and to have the assistance of counsel for his defense.

7.
In suits at common law, where the value in controversy shall exceed twenty dollars, the right of trial by jury shall be preserved, and no fact tried by a jury, shall be otherwise reexamined in any court of the worldwide "United States of Cheon Il Gook," than according to the rules of the common law.

8.
Excessive bail shall not be required, nor excessive ﬁnes imposed, nor cruel and unusual punishments inﬂicted.

9.
The enumeration in the Constitution, of certain rights, shall not be construed to deny or disparage others retained by the people.

10.
The powers not delegated to the worldwide "United States of Cheon Il Gook" by the Constitution, nor prohibited by it to the states, are reserved to the states respectively, or TO THE PEOPLE. AMEN! AJU! AJU!